As the oldest, continuously-run restaurant in Desoto County, Velvet Cream opened for business on July 23, 1947 at its current location. 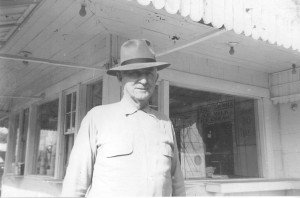 Mr. Lee Lauderdale opened the business in his side yard that had formerly been a cotton field.

Walk-up, fast-food joints were a fad post World War II, and Velvet Cream would have been one such store. When it opened on its corner lot, US Highway 51 was only a gravel road through the sparsely-occupied town. The small, 400 square-foot t building hired local school-aged children in addition to his own family.

In addition to being a Hamburger Stand, Velvet Cream sold Vanilla Ice Cream and Bottled Root Beer and Cokes.

In 1962, Tom B. Flinn, Sr. bought the Velvet Cream lot and began to expand its offerings. 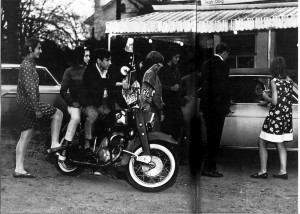 A new Ice Cream Machine was purchased that was capable of offering Vanilla, Chocolate, and Mixed. For its day, three options for ice cream flavors was a luxury!
Three Flavors of Sundaes were offered – Chocolate, Strawberry, and Pineapple – while Milkshakes came in four Flavors – Vanilla, Chocolate, Strawberry, and Pineapple. In addition to these, Onion Rings were added to the menu as their popularity surged in the late 60s.

At the time, a Drive Thru was an unheard of concept in the mid-south. While the invention of the Drive Thru is credited two years earlier in 1975, Velvet Cream had one in the Mid-South Area six months before the larger, chain fast food restaurants experimented with their own versions.

When the Drive Thru first opened, employees frequently had to go outside and explain how to place an order. The patrons of the day were used to Drive-up service, but Drive-Thru service was new altogether. To handle the increased traffic, the Building was enlarged to 700 square feet with a Drive-Thru wing and a back room for storage. 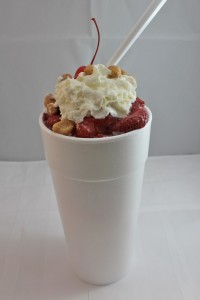 Frequently, the parking lot would be covered by cars full of teenagers who had just gotten their licenses and wanted a place to go hang out with their friends after school and on weekends. However, over the years, the rising population of Hernando has led to there not being much spare room on the parking lot.

The 1980s saw an expansion of Velvet Cream’s menu.

No longer content with just fries, customer preferences shifted towards more sophisticated tastes. Spicy fries were added in the early 80s while a plethora of other fried vegetables and cheeses came shortly after. Soon, Hernando diners had come to expect Fried Cheese Cubes and Fried Mushrooms among their normal selections.

Hernando, it seemed, was not destined to be a small, sleepy town forever.

During the 90s and into the 2000s, immigration from Memphis fueled the city’s fastest expansion it had ever gone through. Velvet Cream, which had one time been Hernando’s only restaurant, soon found itself as just one among tens of others. Questions were raised as to whether Velvet Cream could survive in a sea of corporate chains. Would Hernando’s oldest gem be lost to time?

Diversification and Specialization proved to be the answer. 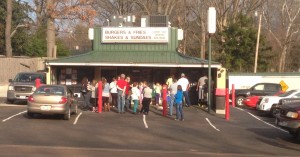 The menu’s size was increased to cater to more diverse tastes. Velvet Cream became the place where one could buy anything they could ever think of getting at a fast food place.

Milkshake flavors underwent a rapid expansion that added four permanent flavors to the menu per year on average: With the menu having 25 flavors in the early 90s, it hit over 100 flavors in the mid-2000s. Other Ice Cream-based expansions included the introduction of the popular ‘Concrete’ – “a blended ice cream treat you eat with a spoon.” Slushes were added as a non-dairy frozen treat alternative.

By the end of the first decade of the new century, Velvet Cream had seen such an expansion to the frozen part of its menu that it needed a new kitchen to keep up with it. In 2010, the building was enlarged for the first time in 30 years. The space provided a place to turn Velvet Cream into more than just a milkshake joint.

Hand-Dipped Ice Cream, custom made fresh in store, was added to the menu. For the first time, this allowed more than just the standard flavors of Chocolate, Vanilla, and Mixed.

Still later, Smoothies and Yogurt were brought in with the rise of frozen yogurt popularity. With another minor building expansion in 2012, machinery was added to produce Italian Ice, Sherbet, Gelato, and Shaved Ice. Each of these products further added to the sheer volume of frozen products Velvet Cream could produce. No longer would people question what Velvet Cream offered, but instead, people wondered what it didn’t. All products combined, over 250 flavors cover the menu and make it impossible to decide!

Along with the expansion of frozen treats came the idea that burgers should be equally as interesting. Americans had been eating the same burger for decades: it was time for more options. Velvet Cream introduced a line of gourmet burgers to mimic its expansion of ice cream flavors. Each burger was tailor made to include things not normally associated with burgers. This continued the theme of pushing the boundaries of food to explore new tastes and combinations.

In its current state, Velvet Cream is a symbol of adaptability, evolution, and experimentation. With a menu spanning an entire wall, one would be hard-pressed not to find something interesting. What began as a small burger shack after the war has grown and expanded. Today, Velvet Cream is a self-proclaimed Burger Bazaar and Ice Cream Emporium.